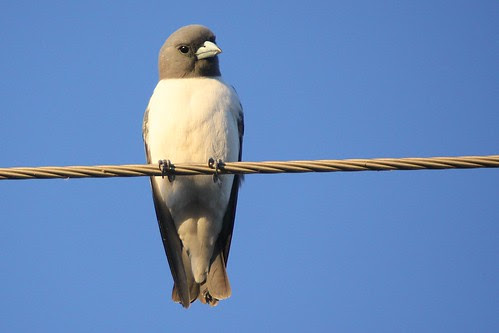 Our first night out of the desert we spent in Windorah, the name is based on the Aboriginal word for 'place of large fish' after Cooper's Creek. Charles Sturt named Cooper's Creek, describing it as a 'fine watercourse' which he would have liked to call a river, but felt he could not, as it had no current.

The caravan park and the camping area on the creek were both crowded with people headed to the Birdsville races, but we were able to convince the publican to let us camp on the lawns behind the hotel. However as the others started setting up tents, I caught sight of the motel units ... The others gave me a hard time about my deficiencies as a 'dune warrior' but they knocked on the door one by one to read in my light, or boil my kettle.

Honeyeaters fossicked in the garden shrubs, apostle birds argued about family matters, woodswallows filled the sky, and swallows in their hundreds came and went from nests under the eaves.

We started off to do some birding along the 12 km nature drive from Windorah along Cooper's Creek, but the birds were tucked away out of the strong winds, which made good photos impossible in any case.
Bird list: