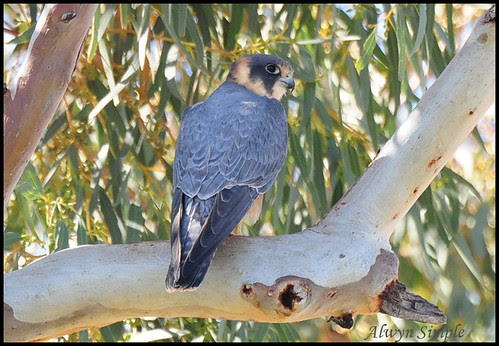 We arrived in Oodnadatta to find that the guy who ran the tyre service at the Pink Roadhouse was away for the weekend, he'd be back Monday - or maybe Tuesday. So we did a quick trip to Coober Pedy; a few beers in an underground bar, a night in a caravan park, early morning repairs by a very obliging garage and back to Oodnadatta. At least it gave us the opportunity to see the Moon Plain (where films like Mad Max, Priscilla and Pitch Black were filmed) and Coober Pedy though we no longer had time for the Painted Desert.

Back to Oodnadatta then across Fogarty's Claypan without incident as it was conveniently somewhere in between too wet and too dry. Ponds along the road dug to support roadworks attracted clouds of zebra finch and flocks of diamond doves.

We had been following a bicycle track for some time, and caught up with the rider at Eringa Waterhole. It would have been interesting to find out his story - bicycling through the Simpson is hardly a mainstream activity, but he wasn't inclined to chat.

The explorer John McDouall Stuart camped at Eringa during his trips in the 1860’s, but long before this it was a significant area in Aboriginal mythology. The waterhole was part of the holdings of the ‘cattle king’, Sir Sidney Kidman, and the ruins of a house, a rainwater tank and a meathouse built during the Kidman era were interesting to explore. With the permanent water and majestic white-trunked gum trees, it was a very pretty spot.