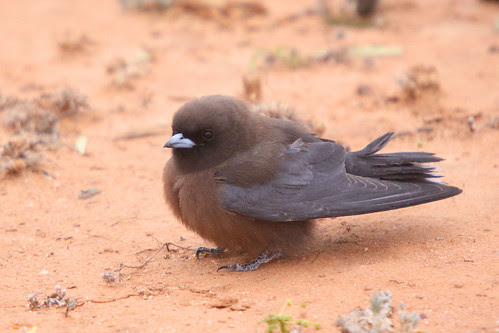 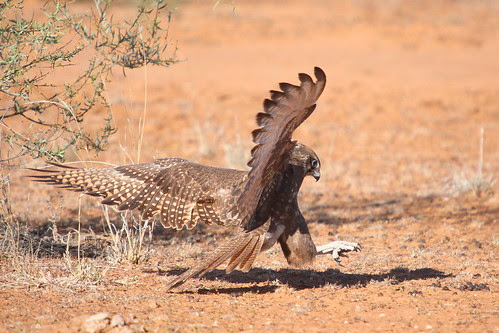 Bowra Station is justifiably known as one of Australia's 'birding hotspots'. Formally privately owned by a couple who encouraged birdwatchers, it is in the process of being purchased by the Australian Wildlife Conservancy using a combination of government grants and private donations. Not all of the Conservancy's properties are regularly open to visitors so birders are anxiously waiting to see what the policies will be at Bowra.

The afternoon we arrived was heavily overcast, making conditions difficult for bird photography. We settled down beside the homestead lagoon to watch large flocks of ibis test out various trees for suitability as a night time roost. They eventually decided against this spot, and all flew off into the dusk. We had some light rain over night, but the next day dawned clear.

Around the homestead and its lagoon were ibis, stilt, ducks, heron, dotterel, swallows, flycatchers, woodswallows, babblers, tree creepers, parrots and an active bowerbird bower. No sign of the Grey Falcon which reportedly visits the home lagoon, but it had not been seen for some weeks - since the young fledged.

We went out to Sawpits Waterhole spotting Bourke's Parrots just where the sign said they would be under the mulga, and watching a Spotted Bowerbird take a lengthy bath. Ringnecks were involved in a noisy courtship routine, and the whistlers' loud, melodious song was heard along the banks. Honeyeaters defended choice clumps of eucalypt blossoms.

Near the Main Creek crossing we pursued Halls and Grey-crowned Babblers, waiting for them to sit still long enough to have their portrait taken. The Button Quail didn't hang about either. The dozens of woodswallows searching for insects on the eucalypts were more obliging. A juvenile even came and sat near us on the ground, presenting several angles to ensure a flattering image.

At Stony Lookout we saw two Chestnut-breasted Quail Thrush, and in following them came across a Red-backed Kingfisher and male and female Red-capped Robins, and Slaty-backed Thornbills. We could hear the Crested Bellbird but could not locate it.

Back at the homestead to pack up camp, Chestnut-crowned Babblers searched for insects at the edge of the lagoon, and a Restless Flycatcher hovered over the water.