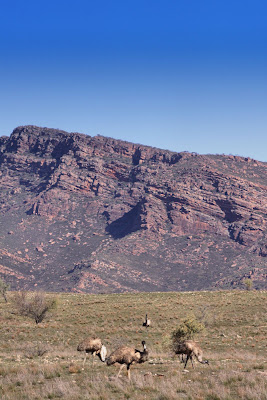 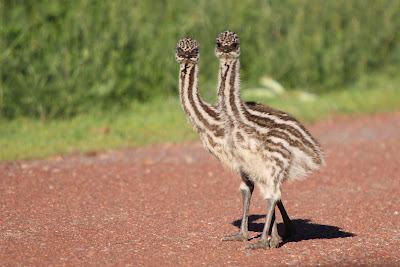 There were many stand-out places that we visited on the trip, and the Flinders National Park was certainly one of them. I have promised myself a another visit, and a longer stay. The spectacular scenery, vibrant colours in the landscape, fascinating cultural heritage, and of course the flora and fauna, all demand a longer stay than we were able to have this trip.

Apostlebirds fussed around us as we set up our tents in the relative luxury of the Resort campgrounds - hot showers, flush toilets, powerpoints and internet access. A father emu wandered past with a large brood of stripey chicks. (BTW that's 'eem you' not 'ee moo'). We had arrived around mid-afternoon so had time for a walk before sunset.

Wilpena Pound is a natural amphitheatre formed by two mountain ranges to the east and west joined by Rawnsley's Bluff in the south. The wall of mountains creates a gently-sloping bowl which is the Pound, with the only breaks being the gorge at Wilpena Gap and a high saddle in the south-western range over which the Heysen Trail passes.

During 1926 Hans Heysen visited the Flinders Ranges and was particularly impressed with its great variety of majestic gum trees. He said in a letter "The great Red Gums in the creek beds fill me with wonder; their feeling of strength of limb, of vigour and life, suggest the very spirit of endurance." His watercolour, Guardian of Brachina Gorge beautifully evokes the area.

Harold Cazneaux took a photograph one of these giant red gums, with the walls of Wilpena Pound as background, in May 1937. He regarded it as his most Australian picture and called it the Spirit of Endurance. He wrote: "This giant gum tree stands in solitary grandeur on a lonely plateau in the arid Flinders Ranges, South Australia, where it has grown up from a sapling through the years, and long before the shade from its giant limbs ever gave shelter from heat to white men. The passing of the years has left it scarred and marked by the elements - storm, fire, water, - unconquered, it speaks to us from a Spirit of Endurance. Although aged, its widespread limbs speak of a vitality that will carry on for many more years. One day, when the sun shone hot and strong, I stood before this giant in silent wonder and admiration. The hot wind stirred its leafy boughs, and some of the living elements of this tree passed to me in understanding and friendliness expressing The Spirit of Australia." The tree still stands and is simply known as 'the Cazneaux tree'. 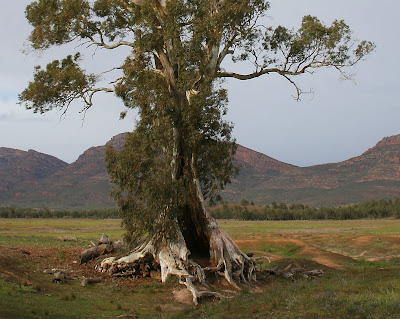 The Brachina Gorge Geological Trail, is a 20 km self-guided trail that passes through 130 million years of earth history. Signs along the trail give detailed information on the formation of the ranges and the evolution of early forms of life. Briefly, it is believed that the the Flinders Ranges began to form when a great depression, known as the Adelaide Geosyncline, developed as the earth's crust stretched and thinned. The sea flooded in depositing rock debris in the depression. The rock layers were then squeezed and folded into a long mountain chain, which then eroded. Eight hundred million years later, we have the Flinders Ranges.

Email ThisBlogThis!Share to TwitterShare to FacebookShare to Pinterest
Labels: Dromaiidae