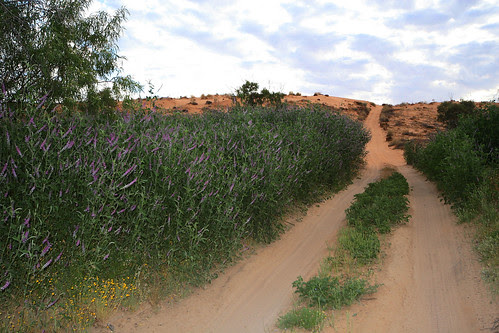 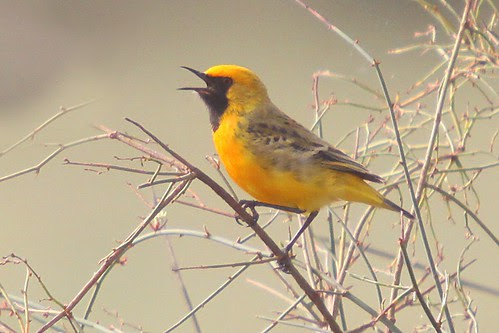 In most years the water in the Mulligan and Georgina Rivers just peters out, lost to absorbtion and evaporation on its journey from northern Queensland to the Lake Eyre Basin. However during flood years they fill the multiple channels that cross the area known as the Channel Country. While the area is currently drying out after the heavy rains earlier this year, the landscape is evidence of the presence of water.
After four days of a familiar pattern of red sand dunes and grey clay pans, with vegetation pretty much limited to sandhill canegrass on the dune crests, spinifex in the swales, and the occasional hardy acacia, we crested one dune to see a lush green valley spread out before us. It was such a suprise, and a thrill, that we stopped and called the other vehices up to join us at the top of the dune.
The rat’s tail couch (Sporobolus mitchellii) which elsewhere was just clumps of dead sticks had produced masses of new growth. Other grasses, sedges and annual plants had appeared from below-ground rhizomes or tubers or previously dormant seed. There were thickets of pea-bush
(Sesbania cannabina) and an unidentified purple flowering plant formed tunnel walls either side of the track. Coolibah trees (Eucalyptus coolabah), belalie (Acacia stenophylla) and lignum (Muehlenbeckia florulenta) shrubs dotted the area. Deep ruts crossing the swale testified to recent muddy conditions.
We stopped to variously investigate insects, animal tracks, plants and birds and to just enjoy the green shade. The number of birds in the area was amazing.
Bird list:
Orange Chat (pictured above)
Crimson Chat
Red-capped Robin
Square-tailed Kite
Whistling Kite
Letter-winged Kite
White-winged Fairywren
Zebra Finch
Australian Pipit
White-breasted Woodswallow
Masked Woodswallow
Australian Magpie
Banded Lapwing
Black-tailed Native Hen
Little Corella
Galah
Fairy Martin
Posted by Marj K at 9:35 AM