A late afternoon walk beside the Tuggerah sewerage ponds had the sun in the wrong position for photographs of Swamp Hens, Pacific Black Ducks, Chestnut Teal, Australasian Grebe, Hoary Headed Grebe, Black Swans and Welcome Swallows on the water, but the fringing bush held a good number of birds.

As any dog-owning, bird-feeding person will attest, birds generally have nothing to fear from dogs, or at least no more than that from their human companion. Quail and Pipits will  stand their ground as my disinterested dogs walk past at the local off-leash area, but flee in panic it I take a tiny step closer with the camera. But dogs do receive a good deal of bad press stemming from the behaviour of some of their naughtier representatives. Good to see them featuring in a good news story.

The Maremma dogs Eudy and Tula, pictured above, have been protecting roosting  penguins on Warrnambool’s Middle Island from foxes and other predators for the past two years.

The island now provides a secure breeding habitat for about 180 adult fairy penguins, compared with just 51 penguins before the dogs took up their positions.

A bleak and rather windy day for the beach, but we stopped in at Soldiers Point at low tide to check on the migrants. No sign of any Curlew Sandpipers today, but there were quite around twenty Red-necked Stints, three Grey-Tailed Tattlers, half a dozen Ruddy Turnstones, a single Sooty Oystercatcher, four Pacific Golden Plovers and the vagrant Wandering Tattler still ambling amongst the incoming waves.

The Wandering Tattler is a vagrant in the East Asian-Australasian Flyway and is uncommon in Australia, although it may sometimes be overlooked, partly because of confusion with the Grey-tailed Tattler. It breeds in Siberia, Alaska and north-west Canada. The non-breeding range is around the Pacific rim where it is generally found on rocky coasts with reefs and platforms feeding in shallow pools and along the tideline. A single bird has been reported here at Soldier’s Point on and off over the last couple of months,  with birds also reported at Long Reef and Newcastle Baths to the north and south.

The Ruddy Turnstones are well advanced in donning their breeding plumage. They travel from their Arctic nesting grounds to coastal wintering grounds along the coastlines of every continent except Antarctica. One bird was recorded flying a 27,000 km round trip from Australia to Siberia - twice.

The distribution of the Pacific Golden Plover is not fragmented, either in its breeding grounds or in its non-breeding areas. It breeds mostly in northern Siberia, between the Yamal Peninsula and the Chukotski Peninsula and the Gulf of Anadyr. In Australia most Pacific Golden Plovers occur along the east coast, and are especially widespread along the Queensland and NSW coastlines.

Both these birds are just starting to colour up. The breeding range of the Curlew Sandpiper is mainly restricted to the Arctic of northern Siberia. In Australia, Curlew Sandpipers occur around the coasts and are also quite widespread inland, though in smaller numbers. Many non-breeding one year old birds remain in Australia rather than migrating north during the southern winter.

The Red-necked Stint breeds in Siberia and sporadically in north and west Alaska. Unlike many of the other waders they migrate across the continent of Australia, and some first year birds move inland for the Australian winter.  Migration starts in the last week of March, with most birds leaving in April.

I have to put an extra 2,000 kms on my car by the end of the month, so took a Sunday drive to Dharug National Park, on the Hawkesbury. A very pretty drive from the Central Coast passing through farmland and rainforest pockets before winding along the river.

Unfortunately, while some areas have long been out of bounds because of Phytophthora (dieback) disease another couple of tracks were closed because of the recent discovery of Myrtle Rust in the park.

So Maureen and I hung around the picnic area at Mill Creek and walked the short Grasstree Track that followed the creek.

Highland Cattle on the riverside farmland

Masked Lapwing at the river’s edge

Young Whipbirds actually showed themselves in the low shrubs

A cooperative White-eared Honeyeater gave me my best photos of this species to date.

An evening dogwalk along the shore of Lake Macquarie showed that there were still plenty of waders about. These Bar-tailed Godwit show no sign of breeding colours and may be young birds who will stay for the winter. The Far-eastern Curlew has become more habituated to people during its summer here, when they first arrive they will take off with their blood-curdling shriek at any movement. Pelicans gathered for their evening roost on the off-shore sand islands.

Had a wonderful day at Taronga Zoo. I’d been planning a visit since I heard that there were new baby gorillas and elephants. Lots of work in progress, it’s really developing as a great place for animals and people – and those fantastic views of Sydney city are a bonus. 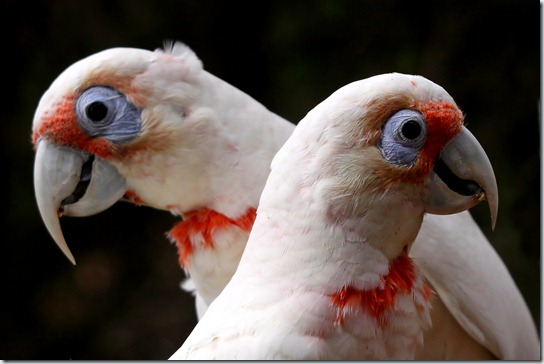 I’m sure that friends who invite you around for a barbeque don’t really mind when you spend the evening with your camera trained on their birdfeeder. These galahs and long-billed corellas were impossible to ignore.

There is a large population of long-billed corellas on the central coast. While originally restricted to South Australia and western Victoria, populations are developing in major centres following the escape or release of caged birds.