From Winton I headed east along the Capricorn Highway through towns where I spent my childhood. In Aramac, where my grandparents lived I came across this Kingfisher outside the little tramways museum. In Barcaldine I camped at the Showground where every evening the trees filled with Cockatoos, Corellas and Lorikeets.


I camped outside Clermont at the Theresa Creek Dam, built since I moved south to provide water for the Blackwater and Blair Athol mines. Whistling Kites soared and called, Pale-headed Rosellas and Rainbow Lorikeet came down to drink, and good numbers of Egrets, Ducks, Coots, Native Hens, Morehens and Swamphens edged the water. Comb-crested Jacana walked on the water lillies, and Apostlebirds and Grey-crowned Babbler fussed around in the shrubs. 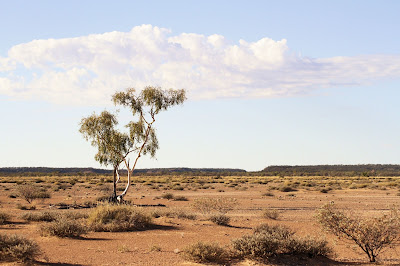 There are a number of mapped and captioned self-drive routes out of Winton, and we took the Route of the River Gum south. With Dusty in the car we were unable to stop in the National Park but it was an interesting drive with mesas or Jump-ups interrupting the broad plains, and vegetation changing from Mitchell Grass to Spinifex, open woodlands of Bloodwood and Mulga, and Lancewood on the escarpments.

A group of Halls Babbler crossed the road in front of us, and at a creek crossing Cockateil flew up into the trees as we passed. Mixed groups of Woodswallow gathered near Mistake Creek. Emu, Brolga and Australian Bustard kept their distance from the road.

The Winton Visitor Information Centre publishes a useful guide to bird watching locations in the shire so armed with this we set off for the Long Waterhole, about 2k out of town on the Jundah road. There were a good number of people camping here but the birds were still plentiful.  It was good to abandon my problem camera and just sit and watch: Spinifex Pigeon, Budgerigar, Zebra Finch, Australian Pratincole, Brown Falcon, Australian Wood Duck, Pacific Black Duck, Crested Pigeon.

The settlement was originally at Pelican Waterhole, but was moved as the danger of flooding became apparent. The only pelican was a commemorative statue, but there were good numbers of Black-faced, White-browed and Masked Woodswallows, and a group of half-a-dozen Brolga, plus Jacky Winter and White-plumed Honeyeater.

Near the Showgrounds are a series of ponds where the artesian water is cooled for town use.

We checked into the Matilda Country Tourist Park, where we were given a great spot under a group of trees, and set up our 'big camp', a screened gazebo under which we could have a little tent for sleeping, Dusty's crate, a kitchen table, and a chair and coffee table. It was HOT, and flies were BAD, so we were the envy of those who had to choose between the caravan and the open.

Birding was good from the gazebo with Yellow-throated Miners, White-plumed Honeyeaters, and Inland Thornbills foraging in and under the trees, and a dripping tap attracting a steady stream of birds.

Of an evening birds gathered on the powerlines to bath in pools left behind by the sprinkler. 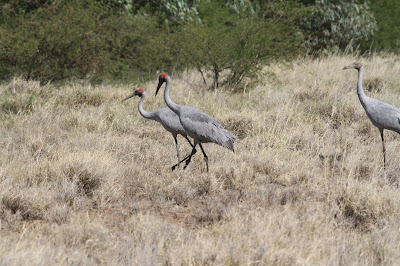 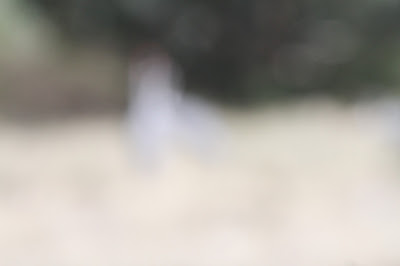 My lens is getting more frustrating - producing great images for a while and then refusing to give me anything other than an overexposed blur for minutes or hours. These two were taken immediately one after the other.
Posted by Marj K at 1:08 PM 3 comments: 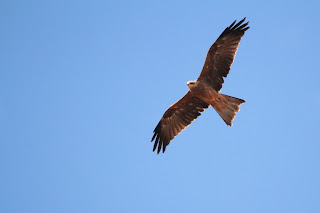 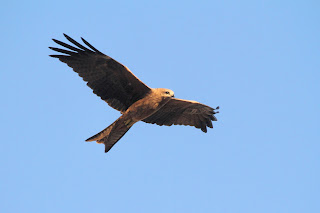 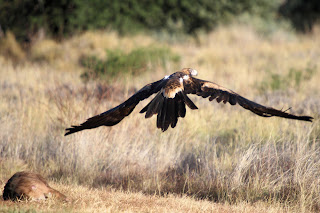 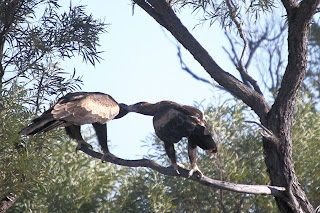 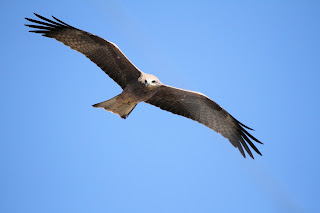 Road kills lines all of the roads out here. Primarily kangaroos and wallabies, but also feral pigs, foxes and small furry things. These attract raptors, so inevitably many of them become roadkill themselves. I can't understand how people can plow through them, just slowing down as you approach gives them time to take to the air. The birds were primarily Black Kite, but there were good numbers of Wedge-tailed Eagles including one pair that were feeding a young bird in a nearby tree.
Posted by Marj K at 12:56 PM No comments: 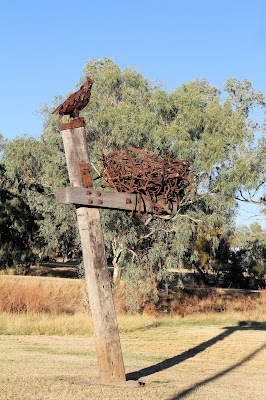 Blackhall has a "Bird Watching Trail" between anabranches of the Barcoo River, marked by this rather splendid The Eagle and Nest sculpture by Richard Moffat. The sculpture is made of  railway dog spikes and timber and bolts from the old bridge. The trail is also a fitness track with some rather state-of-the-art fitness equipment along the way, but luckily it was as well used as most of these things are so there was no disruption to the bird watching.

The Pale Headed Rosella was my nemesis bird of the trip. There were several on the trail, and good numbers in several other places on the trip, but nowhere did I manage a decent photo of one. Trail bird list:


In the caravan park Woodswallows used the sprinklers to hawk for insects, and a Spotted Bowerbird picked berries in a shrub on the other side of the fence. 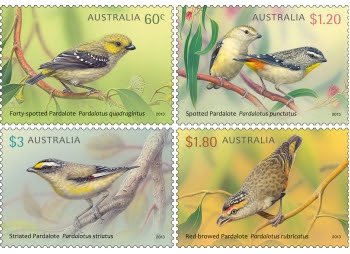 Australia Post has released the fourth set of stamps in the Australian Birds series. It focuses on pardalotes, a family (Pardalotidae) of foliage-gleaning, mainly insectivorous birds native to Australia. The stamps were designed by Australian wildlife artist Christopher Pope.
Posted by Marj K at 11:56 AM No comments: