Email ThisBlogThis!Share to TwitterShare to FacebookShare to Pinterest
Labels: Sternidae

Walking along Stockton Channel there were constant flocks of birds overtaking us.  Most were Noisy Friarbirds, though my practice on the bird counting game didn’t help me determine whether they were a flock of around one hundred birds doing laps, or whether there were thousands of birds. Smaller flocks included Scaly Breasted and Rainbow Lorikeets, Yellow-faced Honeyeaters and mixed Godwits and Curlew. White-breasted Woodswallows were still there in significant numbers, and a young Sea Eagle was being harassed by Ravens.

Email ThisBlogThis!Share to TwitterShare to FacebookShare to Pinterest
Labels: Birds in flight

Bell Miner
Sunday was one of those brilliant crisp autumn mornings that Newcastle seems to specialise in, so Maureen and I went looking for honeyeaters at Galgabba Point on Lake Macquarie. The eucalypts were just starting to flower, and the lorikeets were out in force at the top of the trees, Little, Musk, Scaly Breasted and Rainbow. Not a lot of honeyeaters, Yellow-faced mainly, with Little Wattlebirds and Noisy Miners.
Bell Miners were in abundance, they’ve taken up a territory around the middle of the point. They are hard to miss as the whole colony keeps up their musical, bell-like 'tink' all day, with calls starting just before sunrise and finishing just after sunset.
They are on the official list of “Birds Behaving Badly” as they are deemed responsible for the devastation of eucalypt woodlands. Bell Miner Associated Dieback (BMAD) is the form of canopy decline observed in eucalypt crowns occupied by feeding bell miners. Bell miner colonies feed on the excretions of psyllids without killing the insects. They require high insect densities and they defend the area of the colony to prevent insect predation by other birds.
But they are cute!
Posted by Marj K at 7:52 AM 2 comments:

The narrow stream is hot water from the powerhouse and where it meets the lake must be teeming with fish as there are always hordes of pelican, terns, gulls, and sea-eagles lining up for dinner. I saw a tern with a long length of rope twisted around its leg and back; I reported it to wildlife rescue and they were going to try to catch it.

Myuna Bay is a pleasant spot for a walk with a loop path that goes down by the lake and comes back through the bush. It was rather slow for bush birds today other than Eastern Yellow Robins, Fairywrens and Scrubwrens, but it can be a good spot for Dollarbirds, Cuckoos, and honeyeaters.

The Woodswallows are gathering in large flocks, so they may not be with us for many more days. They breed from the Andaman Islands east through Indonesia and northern Australia and spend their summers further south.

Though called Woodswallows they belong to the family Artamidae, which also includes butcherbirds, currawongs and the Australian Magpie. And although they have a brush tipped tongue like honeyeaters they are insect eaters, catching insects on the wing. 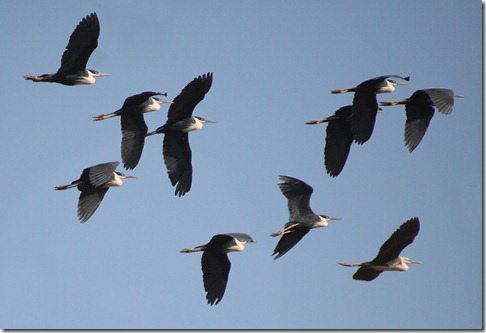 White-Breasted Woodswallows caught in a shaft of light in front of the storm clouds – on our walk along Stockton Channel. These guys should be heading north soon.

The Varied Sitella was my only new bird of the weekend, though I did get better photos than I previously had of a few species, including the Turquoise Parrot. A group of these tiny, inquisitive guys were searching the crevices for insects on the ridge above Borah Creek. Varied Sitellas are only found in Australia, where there are a number of distinct races.

Email ThisBlogThis!Share to TwitterShare to FacebookShare to Pinterest
Labels: Neosittidae

Plumthorpe Travelling Stock Reserve is 16.5km west of Barraba on the Trevallyn Road. The Manilla River winds through the centre with access roads either side. There were trees starting to flower and a number of different honeyeaters were harvesting the early nectar, including White-plumed, Fuscous, Yellow-Tufted Brown-Headed, and White-Naped. Dozens of Double-Barred and Red-Browed Finches chattered up and down the river and a pair of Restless Flycatchers put on a display.

Email ThisBlogThis!Share to TwitterShare to FacebookShare to Pinterest
Labels: Monarchidae

On Easter Saturday, a walk through the Black Spring TSR was hot and dusty. It is a remnant of the once vast Grassy White Box Woodland that covered the area, and runs alongside the road about 6.5k south of Barraba. Maureen and I trudged the 3k to the end without coming across water in any of the three waterholes. Heading up to the top of the ridge we were snapping Mistletoe birds when a  Speckled Warbler came down to scold us. It followed us as we worked our way uphill.

A number of tiny birds were chasing insects in the top of the eucalypts. Buff-Rumped and Yellow-Rumped Thornbills, White-Throated Gerygone and Weebills.

Australia’s smallest bird, Weebills are a bit of a challenge for photographers, as they move fast high in the trees. I managed to get my best shots yet of the little cutie. On the way back to camp we stopped to watch several Jack Winter catching insects on a large mistletoe clump.

I’m not much of a twitcher. I do have a tagging system for photos of new species, and occasionally remember to update my birding list on Facebook, but I don’t keep a list of birds seen. Occasionally in the past I’ve seen a Tweet reporting a new bird somewhere close by, but when I dash over the rarity has always departed for the distant hemisphere from which it has wandered, so I rarely follow up on the information nowdays. But today I‘d dropped a friend off in the East End of Newcastle and was driving home past the Ocean Baths where a Common or Brown Noddy has been spotted over the last couple of days, so I pulled into a parking space.

The Noddy was sitting on the rocks just behind the baths, visible as I walked along the pool deck. I snapped a few shots, and edged closer staying on the pool deck. A gull was snapping at it and it flew up, but came closer to me offering a profile view. The gull followed it and continued to harass it, and after a few minutes the Noddy flew off towards the rocks at the top of Nobby’s beach.

There were at least 25 Sooty Oystercatchers on the rocks, lots of Silver Gulls and Great Crested Terns, and good numbers of Ruddy Turnstones in breeding plumage.

Kookaburras woke us bright and early next morning but were soon followed by a dawn chorus that had me vowing to make a determined effort to learn more bird calls. I recognised the distinctive Crested Shrike-Tit, and the Grey Shrike-Thrush, Rufous Whistler and Pied Currawong. Lots of thornbills and fairywrens, and three King Parrots flew into the top of a nearby dead tree. We had tea and breakfast bars, and waited for the sun to rise.

Headed out on a walk around the reserve there were Brown Treecreepers on every trunk, and a pair of Hooded Robin where we were told to expect them. Little Lorikeet usually stay high up in the canopy, but a group perched on a dead tree in the early morning light.

A pair of Rufous Whistlers were trying to ignore the begging of their almost full-grown young. The young birds seemed to have no fear of photographers, or perhaps they were trying all possible sources of a fee meal.

White-Throated Gerygone and Fuscous Honeyeaters, White-plumed Honeyeaters and a young Brown Songlark were hunting for insects. Ann directed us to a tree in which both Diamond Firetails and Striated Pardalotes were feeding young, and we sat on a log and watched for some time, taking way too many photos given that the size of the birds and their distance from the ground limited any chance of a ‘crippling’ image.

A Wedge-Tailed Eagle flew high overhead, carrying a large branch. For early autumn there were a large number of birds nesting or raising young.  Dusky Wood-swallows were hawking over a patch of open grass, and White-backed Swallows circled above. Back at camp a Grey Shrike-Thrush had found a spider, and an Eastern Yellow Robin looked on.

We camped on the creek, around thirty people spread out among the huge trees along the bank. A late start, slow trip, leisurely tent raising and a cold beverage meant there was not a lot of birding time left in the day, but I went for a walk along the creek, back towards the entry road.

Fuscous Honeyeaters were coming down to drink, a large group of mixed finches played amongst the tree roots on the far bank, and moulting Superb Fairywrens showed off the last of their summer colours.

A call went out that a Goanna (Lace Monitor) was feasting on a wallaby carcass further down the creek, so I grabbed the camera to capture the scene in the last of the sunlight.

After being seriously let down by the printed directions, abandoned by my GPS and led astray by Alwyn, I eventually linked up with him, and with Maureen, and located the turnoff. I drove slowly through Tarpoly Creek TSR, looking for promised Plum-headed Finches in vain. Paragliders lurching out of the scrub with immense packs kept stopping me to ask where they were. Tiny, mainly yellow, birds kept to the top of the trees and only this Hooded Robin and a Jacky Winter paused to offer a photo opportunity.

Email ThisBlogThis!Share to TwitterShare to FacebookShare to Pinterest
Labels: Petroicidae

Barraba is one of the best bird watching regions in New South Wales, and was the first area in Australia to produce a guide to the local birding routes. The Bird Routes utilise old droving roads now known as travelling stock routes and all 14 are signposted. Most of the Travelling Stock Reserves allow camping, though few have facilities. The TSRs generally have permanent water. Over 190 species of birds have been seen in the Barraba region, including the endangered Regent Honeyeater and the vulnerable Turquoise Parrot. Barraba is also the home of the endangered Boronia ruppii, a rare plant species only found here.

So I set off on Good Friday for a weekend in the region with the Hunter Bird Observers, with all my camping essentials packed and the dogs in Angie’s capable hands.