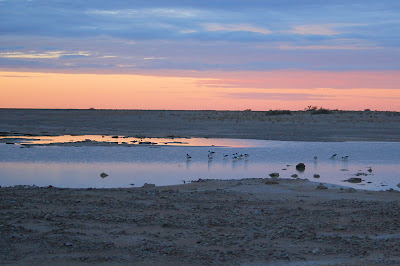 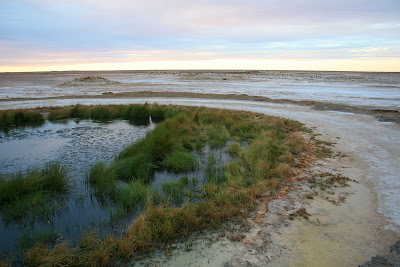 Wabma Kadarbu Conservation Park protects three examples of artesian mound springs. Water enters the Great Artesian basin on the western slopes of the Great Dividing Range in Queensland, and around two million years later bubbles out of fracture zones in the rocks of the Lake Eyre region. The combined action of water, sand, silt and clay and the deposition of limestone from the groundwater forms mounds around the mouth of the spring.

Due to their isolation from other water courses over millions of years, they have developed unique ecology and a spring can support flora and fauna found nowhere else in the world.

Blanche Cup and The Bubbler are active mound springs in the conservation park. Hamilton Hill, a large hill in an otherwise flat landscape, is an extinct mound spring. The Bubbler had a very strong flow of water, and lush greenery alongside its stream. Blanche Cup supported a small wetland.

We pulled in just on sunset. The water was so clear that you could see it bubbling up at the bottom of the pool. The combination of the crusty limestone deposits, the clear running water, and the lush vegetation gave the landscape an 'other world' appearance, especially in the soft light of dusk.

Email ThisBlogThis!Share to TwitterShare to FacebookShare to Pinterest
Labels: Recurvirostridae