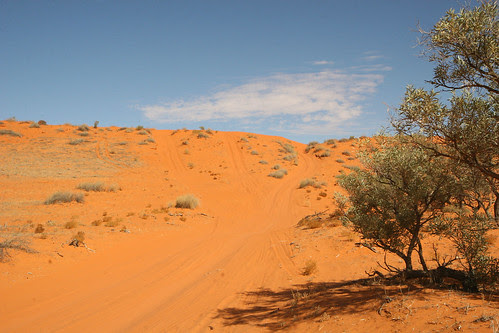 One of the advantages of crossing the Simpson from west to east is that Big Red is the last dune to be crossed - it becomes a culminating moment for the trip. It's sort of a 4WD final exam, after all those smaller assignments.
Of the 1000 parallel dunes that make up the Simpson Desert, Big Red is the largest. It stands approximately 36m above sea level, about 35 km from Birdsville. At the base of the dune is a large clay pan, which gives travellers a good view of Big Red, and time to decide whether to go straight over, or to take the alternate route to cross at the much less challenging Little Red.
A week later, when the Birdsville races were on, there would be a traffic jam here. But when we arrived we had just the voices of one group ahead of us over the radio, sharing the tribulations of their climb. The weather gods had given us 60 kmph winds, which had obliterated the regular tracks over the dune, piled soft sand on the crest, and carved a vertical drop on the east side.
The drivers agreed on a route and decided that the best plan of attack was not to pause. Even though they would only be able to see sky at the top of the dune, they were not to think of a previous occasion on the stockton dunes when one vehicle landed on its grill at the base of a dune, but to continue over the edge with the power on. Easy in theory. In practice we got the opportunity to dig out one of the vehicles that bottomed in the soft sand at the top of the dune. Not much fun in the wind driven sand, but afterwards, in the Birdsville hotel, it seemed like just one more life-time experience.
Following up the beer with a pie at the Birdsville bakery, we were ready to hit the road again. It was 37 C and still blowing a gale.
Headed to Windorah we saw quite a few emus, then on dusk came across a large group of pratincole on the road and the service track beside it. Just out of Windorah there was the amazing sight of 1,000, maybe 1,500 corellas perched of the rails of a large stockyard in the early evening light.
Bird list:
Australian Pratincole
Little Corella
Emu
House Sparrow
Magpie Lark
Willie Wagtail
Posted by Marj K at 4:28 PM

Email ThisBlogThis!Share to TwitterShare to FacebookShare to Pinterest
Labels: Glareolidae