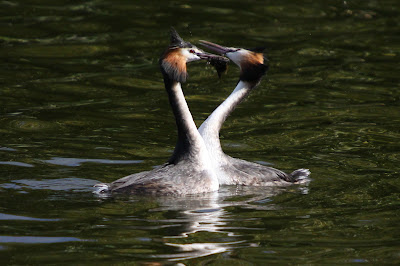 Step 5 Calling all the time, they embrace by rubbing necks. 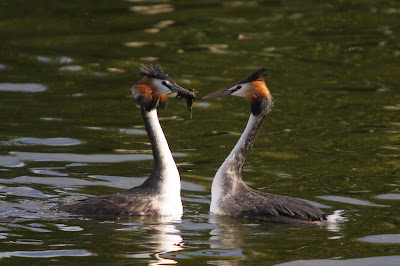 Step 4 With crests erect and necks fully stretched they swim facing each other. 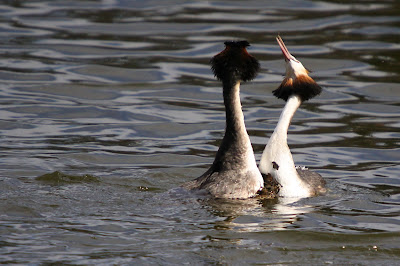 Step 3 Male holds weed, while female nods her head from side to side. 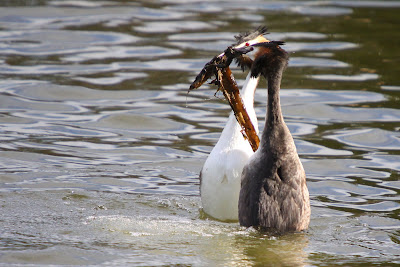 Step 2 Both holding the weed face each other, rising out of the water as they tread with their feet.. 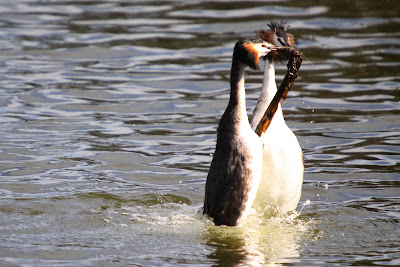 Step 1 Leap out of the water both holding a piece of weed.


The Great Crested Grebe has a long and elaborate courtship, with displays so complex they are often referred to as dances. Both sexes perform a series of displays, many of which are forms of normal behaviour that have been exaggerated and have become almost rituals.

In the headshaking display, the two prospective partners face each other with their necks straight and their head feathers spread out. They then turn their heads rapidly from side to side. The display usually ends with ritual preening.

The discovery dance involves one of the birds fluffing out its feathers and spreading it wings, while the other dives and rises erect from the water with its bill pointing downwards.

Another, the retreat display, has one bird suddenly dashing away across the water and then turning to face its mate.

By far the most complex is the weed dance in which both birds, like synchronized swimmers, dive together then rear up from the water and face each other, breast to breast, with their beaks full of weed as they dance and display to each other. The images above show the weed dance. This mutual display may be in the form of a "promise" to build a nest, as it is material from the lake bottom that comprises much of the material.