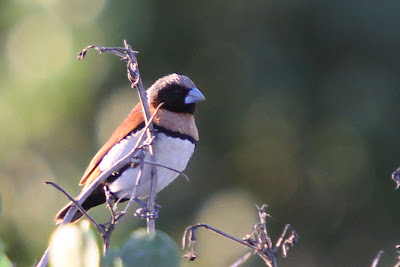 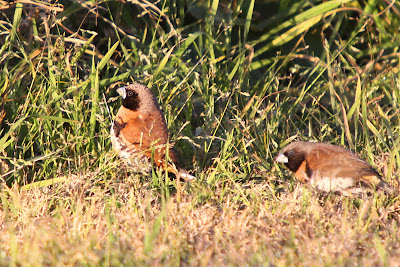 The infrequently-mown grass beside Hi-Fert provides a buffet for Double-barred and Red-browed finches. Today they were joined by a flock of Chestnut-breasted. The Chestnut-breasted Mannikin or Chestnut-breasted Munia (Lonchura castaneothorax) can form flocks of several hundred birds - this group were a paltry twenty or so, but good to see them there.

John Gould wrote of it:
“I had not the good fourtune to meet with this bird in a state of nature, but I have been informed that it frequents reed beds bordering the banks of rivers and lagoons on the eastern coast, and that it much resembles the Bearded Tit Panurus biarmicus, of Europe in the alertness with which it passes up and down the upright stems of reeds, from the lower part to the very top, a habit for which the lengthened and curved form of its claws seem well adapted."
Posted by Marj K at 6:29 PM

Email ThisBlogThis!Share to TwitterShare to FacebookShare to Pinterest
Labels: Estrildidae