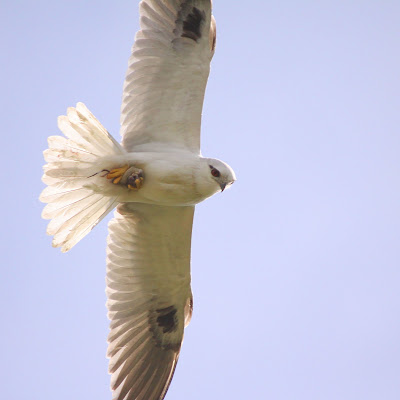 I'd parked and let the dogs out of the car when I noticed the kite hovering at the far end of the park. I broke into the closest to a run that I can manage, but it dropped from sight. But then it flew up immediately overhead, clutching a mouse.
Black-shouldered Kites live almost exclusively on mice. A single adult can eat three or four mice in a day. They are one species that has expanded its range since European settlement, benefitting from agricultural practices that have increased the populations of the house mouse.
The name 'Black-shouldered Kite' was formerly used for a Eurasian species, Elanus caeruleus, and a North American species, Elanus leucurus. However modern references to the Black-shouldered Kite should unambiguously mean the Australian species. E. caeruleus is now the 'Black-winged Kite' and E. leucurus the 'White-tailed Kite'. A rare example of the aussie bird being able to keep the name it has been known by.
Posted by Marj K at 8:12 AM