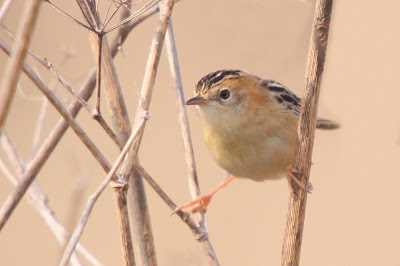 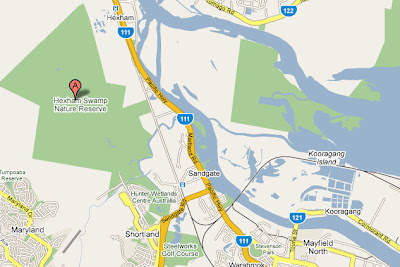 The Reserve covers some 900 hectares on the southern sideof the Hunter River and is bounded generally by the Hunter Water Corporation’s Chichester pipeline to its north, the abandoned Richmond-Pelaw Colliery Railway to the west, the Ironbark and Fisheries Creek system to the east and reclaimed agricultural lands to the south. The area contains a number of endangered and vulnerable species, including the Green and Golden Bellfrog (Litoria aurea), Latham’s Snipe (Gallinago hardwickii) and the Marsh Sandpiper (Tringa stagnatilis).
The cisticolas were everywhere, calling from their perches on the wild fennel. This area was much drier than when I previously visited, when there was a large body of water on both sides of the railway line, and huge numbers of ducks. There were still significant pools amongst the long grass, but views were limited unless the birds flew.
Bird list:
Golden-headed Cisticola (pictured above)
Masked Lapwing
White-headed Stilt
Black Swan
Purple Swamp Hen
Australian Pipit
Willie Wagtail
Superb Fairywren
Swamp Harrier
Tawny Grassbird
Brown Quail
Posted by Marj K at 8:35 AM

Email ThisBlogThis!Share to TwitterShare to FacebookShare to Pinterest
Labels: Cisticolidae