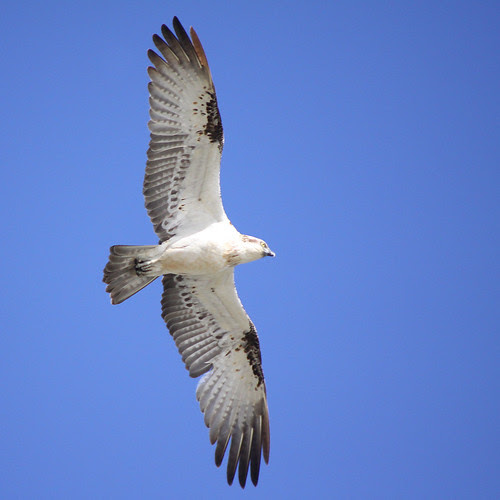 A pair of Osprey are raising two chicks in a nest on top of a Norfolk Island Pine in the Crescent Head Caravan Park, on the New South Wales mid-north coast.
Osprey nests are built up each year, sometimes for decades, from sticks, seaweed, branches and driftwood, and can weigh up to half a ton. The female incubates the eggs for around 35 days, depending on the male to feed her. Both birds then feed the young. The chicks take their first flight around 55 days after hatching.
Its specific habitat requirements have contributed to its decline in NSW, where it is officially listed as vulnerable.

The locals were very proud of their Osprey, with many people pointing out the nest to me. Most though, thought it was a small Sea Eagle that couldn't fish properly - diving into the water, rather than snatching fish on the surface.
Posted by Marj K at 10:52 AM