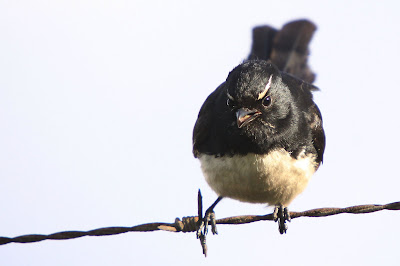 After his surgery I have to keep Thommo away from playmates, water and sand so I'm back at the wasteland on Kooragang Island. All the familiar little birds were there, and terns and gulls on the river. A young sea eagle flew over directly overhead carrying something that was trailing ribbons - hard to tell just what from the photos.
I snapped a few photos of him, but concentrated on 'action' shots of the wagtails. I got a few nice images of fanned tails, but I like this shot of its characteristic scolding pose.
The willie wagtail is one of Australia’s most common birds, but one of our most charming. It is in almost constant motion feeding or defending its territory. During feeding it will give sudden flicks of its wings to startle insects which it then catches with a fast agile flight, similarly it will startle insects on the ground into flight. I remember as a kid being told that their song was them saying ‘sweet-pretty-creature’ but they have a range of calls including a loud metallic chatter when annoyed. Then tend to scold the dogs, and will even fly down onto their backs, pecking at them. They are quite aggressive and will attack predators far larger than themselves that come near their nests.
Interestingly, it can expand its white eyebrow to show its emotions, so the eyebrow can change from being almost invisible to being quite conspicuous.
Posted by Marj K at 6:05 PM

Email ThisBlogThis!Share to TwitterShare to FacebookShare to Pinterest
Labels: Rhipiduridae