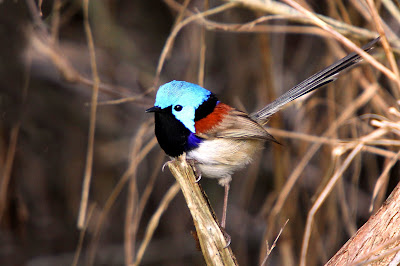 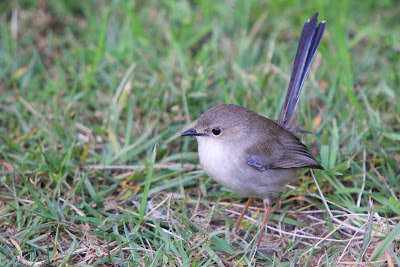 Variegated Fairywren - male, non-breeding
If this blog had more than its three readers, I would not mention Goolawah here, as one of its major attractions is that so few people seem to know about it. New South Wales eleventh, and newest, state park, it encompasses significant coastal lands, stunning beaches, wetlands, littoral rainforest and swamp sclerophyll forest. It is proposed that the Park will eventually include a beach walking track along the spectacular coastline from Port Macquarie to Crescent Head. But for the moment there is little in the way of human interference to the natural landscape. Camping is primitive, with cold outdoor showers and composting toilets the nearest thing to an 'amenity'.

Dogs are allowed off-leash on the beach, and on-leash in the camping areas and on the bush tracks so it is a perfect spot for a short getaway around three hours north of newcastle.

Among the animals identified within Goolawah State Park are swamp wallabies, kangaroos, bandicoots, echidnas, possums, dingos, sugar gliders and many species of bats. Birdlife includes shorebirds and raptors along the beach, waders and waterfowl in the wetlands, and many species of honeyeaters, seedeaters and insectivorous birds living in the forests.

We were only going to stay a couple of days, but the weather was perfect, we found nesting Osprey, and usually had the beach entirely to ourselves, so we ended up being there for the working week.