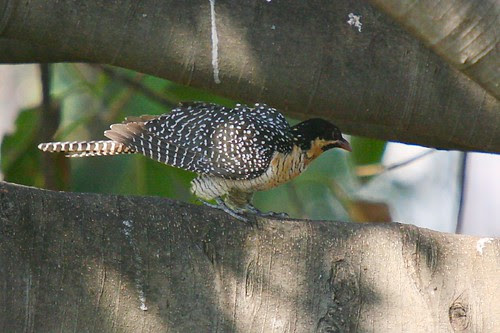 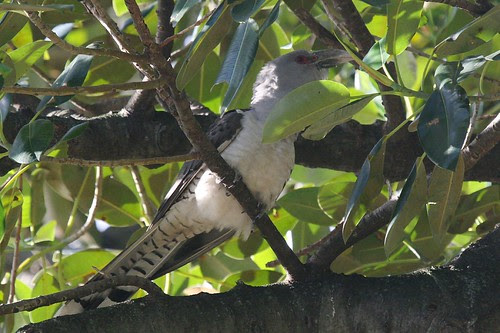 The inhabitants of Wickham must have been awake early this morning with large groups of both these birds in the fig trees in the local park. They generally start up their loud distinctive calls around 3:00 am.

Though hearing them is easy enough, they stay high in the huge, dense fig trees along Maitland Road and seeing them is not so easy. A photo usually involes standing in the traffic, or shooting straight up over your head.

Both the koel and the channel-billed cuckoo migrate from Indonesia, and probably further north for the summer, arriving in October and leaving again in March. They are both brood parasites, that is, they lay their eggs in the nests of other birds and leave them to raise the chicks. The koel tends to parasitize the red wattlebird, the magpie lark and figbirds, while the cuckoo uses the nests of ravens and magpies.

Both species seem to be increasingly common in urban areas, perhaps because of the proliferation of berry plants, which has also increased the numbers of their host species.

Email ThisBlogThis!Share to TwitterShare to FacebookShare to Pinterest
Labels: Cuculidae