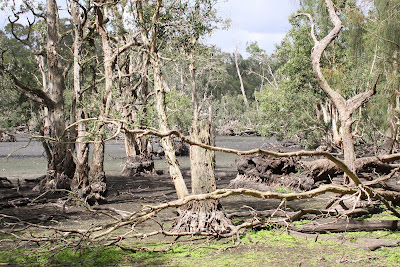 Eastern Great Egret
Maureen and I went out to the Wetland to see the exhibition of photographs in their recent competition. Pleased that our images had passed the first cut, we wandered around the many great pictures on show, then unable to decide between them, Maureen voted for my fairywren, and I voted for her swallow babies - conveniently hung side-by side.

Most of the egrets were now sitting on their eggs, though some birds were still putting final touches to the nest. There are far fewer birds than in recent years, though the ibis numbers seem to be growing. In addition the ponds at the wetlands are rapidly drying up, with the melalueca swamp where the egret colony is, now just black mud. There were several dead ibis young in the mud, and any baby bird who found itself bogged would exhaust itself before reaching firm ground. 80% of New South Wales is now officially drought stricken, with a further 15% borderline. A mere 5% of the state is unaffected by drought.
Posted by Marj K at 5:53 PM