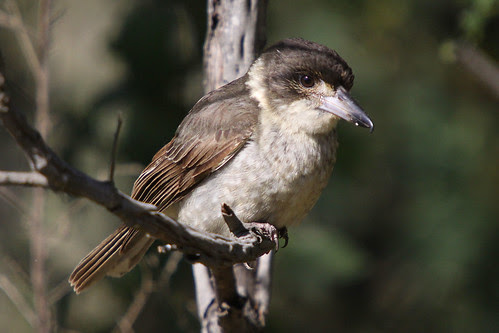 The Grey Butcherbirds have again raised young in my yard. Two babies were hopping about this morning making their first attempts at feeding themselves.

I love having these guys around. Apart from the fact that they clean up all those huge spiders that like to construct their webs across the paths, butcherbirds have one of the most melodic songs of all Australian birds. They sing in harmony too - with the song started by one bird and completed by another, so perfectly coordinated that it sounds like a single bird.

The young birds remain in the territory for around a year, helping the parents raise the young of the following year before establishing families of their own.

They get their name from their habit of storing uneaten food (lizards, mice, birds) in the forks of branches or impaled on thorns. They have adapted well to city living and are common in the suburbs.
Posted by Marj K at 6:22 AM

Email ThisBlogThis!Share to TwitterShare to FacebookShare to Pinterest
Labels: Cracticidae