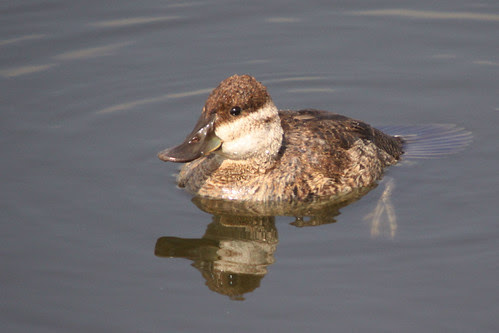 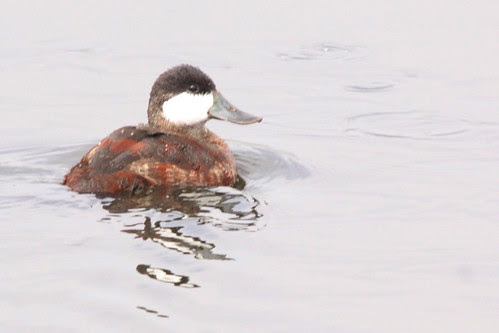 The stiff-tailed ducks (Anatidae: Oxyurini) include some rather distinctive birds, including our local musk duck and blue-billed duck. The female's stiff tail can be seen in the top photograph, spread out behind her. The tail can also be raised to a vertical position. Stiff-tailed ducks generally inhabit freshwater lakes and marshes. They are foot-propelled diving birds, and their legs are set far back, making them awkward on land, so they rarely leave the water. They aren't often seen in flight and are believed to travel at night.
They are known for their unusual courtship displays involve drumming noises from inflatable throat-sacs, head throwing, and erecting short crests.
There are only two species of stiff-tailed ducks in the United States. The Ruddy Duck is the most common and is found year round in lakes and ponds on the West Coast. The Masked Duck is the other stiff-tailed duck but it spends its time in warmer areas of the country such as southern Florida and Texas.