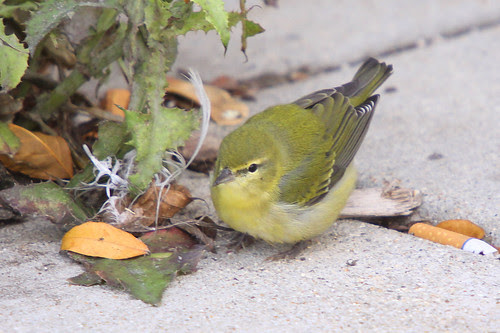 Milwaukee County Parks publishes a map of the Oak Leaf Birding Trail which includes an innercity loop that passes through four parks; Pere Marquette, Red Arrow, Zeidler, and Cathedral Square. A break in the weather tempted me into a longish lunch break during the conference to wander the loop.

Despite being quite small parks, they seem to play an important role as links between larger reserves, providing a corridor for birds and wildlife. The route also passed alongside the river, were there were ducks and geese, as well as gulls. There were a number of warblers hunting for insects, the Tennessee Warbler spends its summers in Canada, and was passing through Wisconsin on its way to Central America.

Email ThisBlogThis!Share to TwitterShare to FacebookShare to Pinterest
Labels: Parulidae