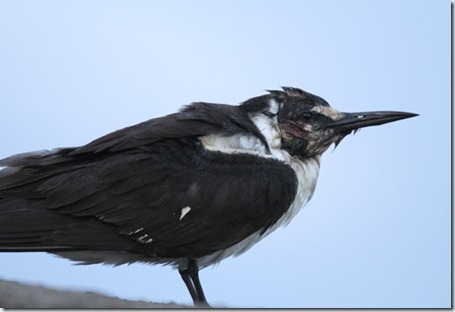 In what may be part two of the Parasitic Jaeger/Arctic Skua story, a sighting of a Sooty Tern was posted to the HBOC list at around midday on Feb 3rd. Later that day others saw this bird, injured, on the rocks on the breakwall. Next morning there were no sightings of a Sooty Tern well or ill. The Parasitic Jaeger, during its breeding season in the Arctic, feeds on small mammals and passerines, but during its winter off the coast of Australia it gets most of its food by attacking gulls and terns and forcing them to disgorge their stomach contents. This bird may have been the victim of such an attack.

The Sooty Tern is a threatened species. It is a pelagic species that forages offshore and birds are usually only observed onshore during breeding season or when they have been forced there by stormy weather. They are seen more often in the tropics, but follow warm currents southward. (The sea of Newcastle is a balmy 23c at the moment.) They follow migrating tuna, feeding off the fish that the tuna drive to the surface.