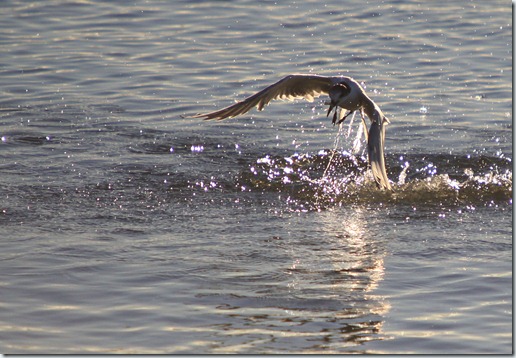 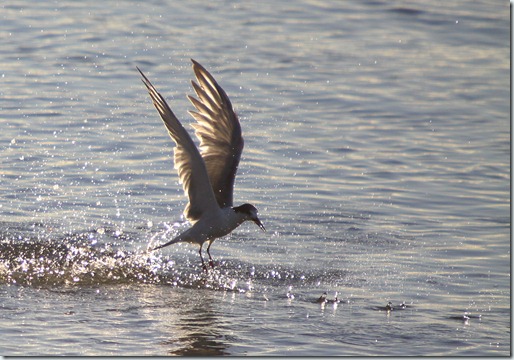 The early sun was behind this group of Common Terns feeding on a school of small fish in the harbour, so while they aren’t great images for ID purposes, I kind of like the effect.

The species is a non-breeding migrant to Australia, where it is widespread and fairly common on the eastern coast during summer. The subspecies occurring in Australia is predominantly Sterna hirundo longipennis. Reportedly “In non-breeding plumages, adults differ from those in breeding plumage by: white forehead and lores that merge to dirty white and black-streaked crown and black half-cap on the rear crown, nape and ear-coverts, and with a large black patch in front of the eye; pale grey rump merging into white uppertail-coverts; and a conspicuous black cubital bar and a dusky secondary bar on the upperwing and a dusky wedge on the outer upperwing. The underparts are also white. The bill is black, occasionally with a red tinge at the base, and the legs usually black or black faintly tinged with red.”

Common Terns are recorded in Queensland from September, and usually arrive in NSW from late September to October. They leave again in mid-April.

The number of birds wintering in in NSW are thought to be increasing, with greater numbers in some areas where they were previously scarce or absent. For example, in Sydney Harbour National Park, Common Terns were seldom reported before 1970 but more recent counts are typically of up to 60 birds.