The Central Coast Group of Birding NSW  visited McPherson Road Swamp and Pioneer Dairy yesterday. Arriving at the swamp there were Dollar Birds perched on the wires and two Whipbirds wresting on the ground under dense shrubs. Golden-headed Cisticolas and Tawny Grassbirds called from the reeds, and Superb Fairywrens scolded from the bushes along the track.

A resident in one of the houses overlooking the water had a bird feeder on the fence, which had attracted numbers of Chestnut-breasted Manikin and Red-browed Finch.

Cattle Egret,  Eastern Great Egret and an Intermediate Egret fished along the shore. Amongst the more common ducks was a Hardhead, but sign of the Pink-eared Duck sighted there recently.

We flushed three Brown Quail, and watched two Latham's Snipe take off from nearby for safer locations on the far side of the water. Several Black-fronted Dotterel were content to stay put.

At Pioneer Dairy there were good numbers of ibis, spoonbills, egrets, moorhens, swamp hens and ducks. Channel-billed Cuckoos and Figbirds flew to and from the giant fig trees. Raptors included Australian Kestrel and White-bellied Sea Eagle. A lone Australian Pipit his in the grass. Perhaps the 'bird of the day' was a substantial flock of Plumed Whistling Duck. 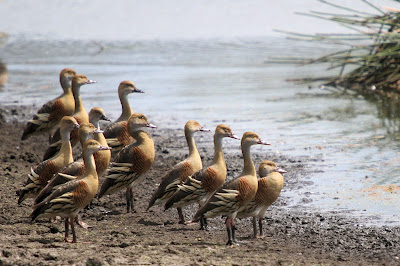