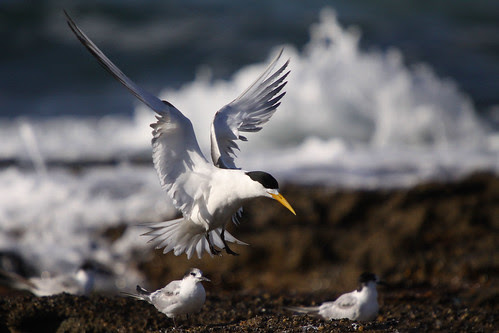 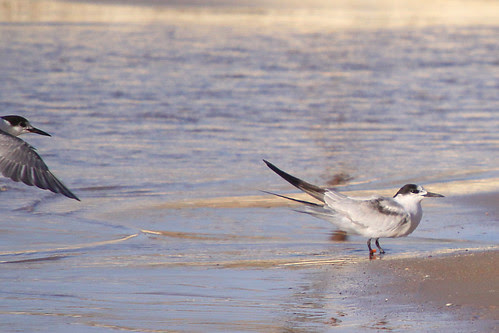 I met up with Maureen and Alwyn early morning at the Newcastle Ocean Baths, the rocks behind which are a popular roost for gulls, terns and the smaller waders. The tide was high and many of the birds had moved to the sands of the wading pool, called the Canoe Pool. This pool has a map of the world on its base, now covered by sand, but old photos show the pool jammed with small boys in canoes circumnavigating the world.

While Birdline NSW reported up to 250 common terns roosting here last week, today there were about 50, with 14 ruddy turnstones, 100 crested tern, and a sprinkling of silver gulls. One of the common terns was banded with an orange flag on the right leg and a silver band on the left.


An agreed flagging protocol for the East-Asian Australasian Flyway, means any country, or even region within a country, can join in the research project and that, unlike with banding/ringing, the bird does not have to be re-caught to find out in which region it has been banded. An orange flag means that the bird was flagged in Victoria, Australia. The Australian Bird & Bat Banding Scheme (ABBBS) has been banding Common terns since 1955. Band GR27710, banded in May 1956 at Copeland Islands, U.K. was recovered after twelve and a half years at Kow Swamp, Victoria having travelled 16,256 km.