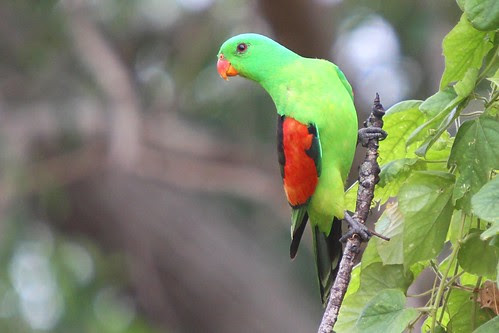 At around eight this morning I went out to Buffalo Creek at the northern end of the Casuarina Coastal Reserve. It was overcast, and the tide was well out. A number of shore birds were foraging on the tidal flats. I wandered out a way, but the soft wet sand didn't encourage me to venture too far.

A short trip through the mangroves brought a gerygone, honeyeaters and a triller - and a million mosquitos.

On the drive back towards Lee Point picnic area there were eighteen black cockatoos feeding amongst the new green shoots that had emerged after burning off. I was able to get a number of images of them on the ground before they withdrew to a nearby tree.

The picnic area provided a bird bonanza. As well as the birds I had previously found here - honeyeaters, swallows, kites, kingfishers - I heard and then saw a bowerbird while edging closer to a group of double-barred finches playing in a vine. A mannikin flew onto a nearby branch and was joined by several of the double-barred finches. (I think Owl Finch is a better description of them, but that name seems to have gone out of favour.)

Then as I had decided to head home, and was back at the car park, a red-winged parrot flew past to a low branch where he went through a series of acrobatic manouvres eating fruit from a vine.