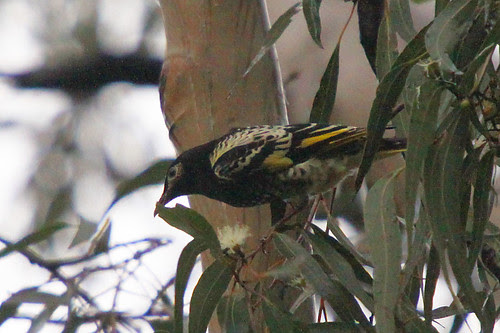 I arrived at Werakata just on sunrise, meeting Mick and Lucas at the Pelton Road entrance. It was a mild morning at 15C, but grey, with a precipitation that was part drizzle, part fog. The track looked as though three weeks of rain on clay had been followed by a weekend off-road rally so we headed cross country.
The Lower Hunter Spotted Gum - Ironbark forest is dominated by spotted gum (Corymbia maculata) and broad-leaved ironbark (Eucalyptus fibrosa) with grey gum (E. punctata) and grey ironbark (E. crebra).
The spotted gums, in particular, were in flower and attracting a wide range of honeyeaters. This is the home turf of the Yellow-tufted Honeyeater, and we saw many of them. High in the trees were large flocks of Little Lorikeet. Red Wattlebirds and Noisy Friarbirds did their best to keep other birds from the best flowers.
As we reached the creek we could hear Regent Honeyeaters and saw two fly out of an ironbark. We climbed the ridge following their calls and came across more than thirty birds, calling, flying and feeding in a large flowering spotted gum. At one point a dozen birds flew to nearby dead trees and perched for a moment before flying back. Nearby trees also had groups of three to five birds.
The weather showing no signs of improving, we walked back to a spot near where we'd parked where a separate small flock of Regent Honeyeaters where calling and feeding, despite being chased by Noisy Miners and Red Wattlebirds.
Not a great day for photography, but a wonderful experience to see so many honeyeaters, especially so many Regent Honeyeaters together.