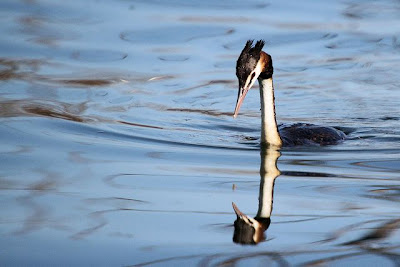 There were Great Crested Grebes visible near the shore around most of the lake, but in a sheltered corner near Ski Beach four pairs were nesting in the submerged shrubs close to the bank. 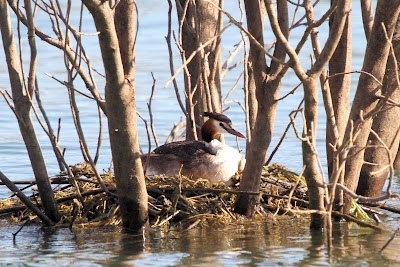 Three pairs of birds had already laid eggs, with one bird sitting on the nest and the other floating nearby, adding to the nest, chasing away coots or just keeping an eye of things. A fourth pair had just started nest building at some distance from the others. 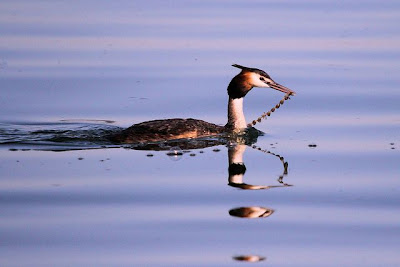 Next day their nest had been destroyed and they were building another, still some way from the established pairs but in the other direction. They were attempting to take sticks from the other nests so there was quite a bit of agitated chasing.

Next time I visited one of the eight birds was missing. I watched for around two hours while the eggs lay exposed in the nest an one bird circled in the water nearby. It did sit on the eggs for a few minutes at a time, but spent most of the time beside it. 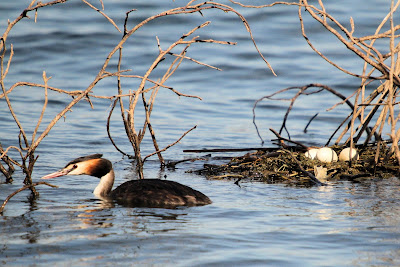 Then after a couple of hours an eighth bird turned up. There was a brief "courtship"exchange and one of them climbed onto the nest and the other took up watch. Order had been restored. 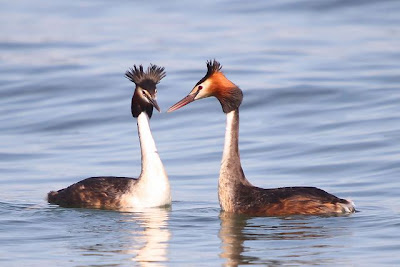 I'm planning a return visit. I'd love better photos of grebes carrying babies on their backs that I have managed in the past.