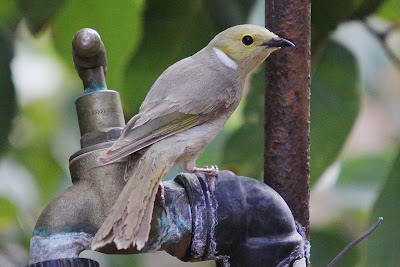 William Creek is one of the smallest towns in Australia, with a population of just 10, but it is situated on possibly the world's largest working cattle stations - the 24,000 square kilometre Anna Creek Station, part of the S Kidman & Co empire. Over the years the pub has been adorned with business cards, hand-written notes, caps, underwear and anything that visitors feel like leaving as a calling-card.

The Memorial Park contains an eclectic collection of objects such as the first stage of the Black Arrow Rocket, Britain's only successful independent space launch, and a truck belonging to the outback mailman Tom Kruse, who was the subject of a 1950s documentary called Back of Beyond.

While the town had the usual collection of 'urban' birds, about 10 kms before we reached town two quail-thrush crossed the road ahead of us and scampered up onto the old ghan line. Hard to believe they were finding something to eat in the arid stony region we were travelling through.