I was watching a group of birds playing what seemed to be a special bird game in the samphire on Ash Island when a car pulled up beside me and the driver asked "You watching the ravens?" - immediately identifying himself as a serious birder. For to the general public in Australia all big black birds are crows. There are three species of raven in Australia, and two resident crows, but to give Joe Public his due it is not always easy to tell them apart, and Joe can be forgiven for giving up and just calling them all crows.

In general the ravens are bigger than crows, except that the Torresian Crow is bigger than the Little Raven. Ravens have throat hackles and crows don't, although the Forest Raven's hackles are so slight as to be unnoticeable. The Little Crow and the Forest Raven have deep baritone calls, the Australian Raven a more high pitched note ending in a mournful wail. All of them have brown eyes in their first year and white eyes on maturity. The Australian Raven doesn't exhibit wing flicking while calling, but then nor do the Torresian Crow or Little Crow, while the Little Raven and Forest Raven do. Ravens have grey bases to their feathers, while crows have white bases - except if they are juveniles, in which case they will have grey bases like the ravens. 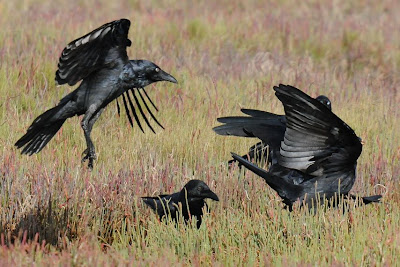 Looking up the origin of the phrase 'stone the crows', American references suggest it is an old English phrase, while English references describe it as an Americanism. However the earliest published uses of the saying are Australian in origin, and as an expression of suprise tinged with annoyance it has an Aussie vibe. In Lennie Lower's Here's Luck published in 1930:

"I told Stanley that you had been thrown out and asked him to pull up, but he merely laughed and refused," he explained. "Stone the crows!" exclaimed Stanley indignantly. 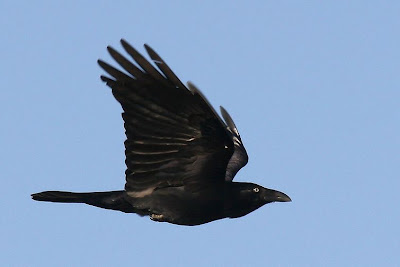 Email ThisBlogThis!Share to TwitterShare to FacebookShare to Pinterest
Labels: Corvidae