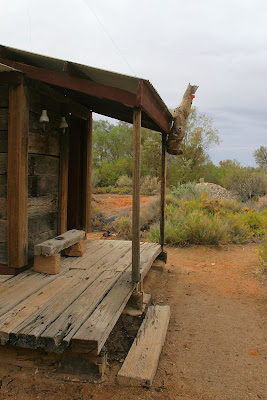 Galah in a nest box on the shower block.

Coward Springs is a veritable oasis in the desert. During the construction of the Ghan Railway Coward Springs became a large settlement and even after its completion, when the railway workers had moved on further north, Coward Springs remained an important siding for a long time.


A natural spa has been built over the springs, providing a soothing dip for weary travellers before feeding a wetland area of over 200 hectares that has been fenced to exclude stock. Over 120 bird species have been recorded here, with new birds sighted each year. The old buildings have been wonderfully restored with marvellous touches of bush craft and railway memorabilia. Even lighting the 'donkey' fire for hot water was a mini outback adventure.

It was dark when we pulled up, and soon began to rain, but the morning dawned fine, if cloudy. We were on a tight schedule to meet up with others at the appointed time, but we packed up, and went for a walk around the wetlands. The path we chose, unfortunately, led down a side of the bore drain that was heavily vegetated and it was difficult to good photo opportunities where the water birds were concerned. Bush birds were a little easier to capture.

At the Beresford ruins, a little further on, a dam gave us an opportunity for further birding with ducks and grebes on the water and honeyeaters in the shrubs.