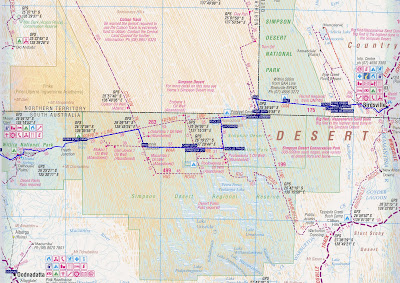 From Purni Bore we travel the French Line. The challenges primarily came from the corrugations on the dunes - the result of people who don't let their tyres down to low enough pressure, and who then put their foot down heavily in several attempts to get over the dunes, carving out the subsand and then continuing on their way oblivious of the damage they have done. Our drivers seemed to be working on a footprint length of 300 to 350 mm which translated to 18 psi on the Prados and 16 psi on the Pajero.

At the Bore we met two KTM riders with a support team who were aiming for a three day crossing, but for most vehicles four or even five days is more realistic. 100 km a day leaves time for appreciating the view, photographs, and rest and meal stops.

The French Line from Purni Bore to Colson Junction crosses the Simpson Desert Regional Reserve with sand dunes averaging 8 to 12 metres in height. Just before Colson Junction we struck our first tricky dune - about 20 metres high with a dog-leg across the top, soft sand, deep holes beside cane grass mounds and a scalloped approach.

The Colson Track heads south, running along a swale between the lines of dunes, to meet the WAA Line. Clay topped for the most part, the track was smoothish compared to the French line and a change from crossing the dunes.

We turned east on the WAA line which seemed little travelled compared to the French line. It's interesting how quickly wind and the occasional rain shower can return the track to pristine desert. The dunes were higher than those we'd encountered on the first part of the French Line, perhaps averaging 12 to 20 metres. Many of them had a sharp drop on the eastern side. We encountered a couple of vehicles travelling east to west, and discussed which was the better route. Opinions were divided. East to west has steeper climbs, but west to east has longer climbs and steep drop offs.

We found a level clay pan to pull off and set up camp for the night. Low dunes and a few scraggly acacia provided some protection from the wind, and the Wild Turkey had a warming effect. Pre-dawn, fairywrens and bowerbirds provided an accompaniment to the brillance of the stars as they gave way to a red dawn.

Just before Tilly Junction we crossed a large saltpan, and began to see the first of the gypsum outcrops that would become common. At the junction we headed north on Knolls Track, named for the Approdina Attora Knolls, two gypsum topped hills that are both fragile and scientifically significant. We walked to the top, where there were wonderful views out over the gidgee scrub and the saltpan that is Lake Tamblyn.

We spent that night near Peoppel's Corner after playing the customary, "I can stand in three states at once" game and taking it in turns to pose for photos. The morning brought spectacular light peeping through storm clouds and highlighting the textures on the dune and saltpan.

Heading up the QAA line we came across an amazing dune, perfectly sculptured, beautifully lit by the low morning sun and tracked by a dingo, birds and lizards. We stopped for some time at the top, playing with the wideangle lens. The red dune and blue sky made for wonderful pictures.

More dunes, alternating with empty saltpans - a couple of big dunes, some suprisingly with flowering plants, but for the most part the vegetation was restricted to occasional gidgee trees.

Then, about 5 or 6 kms past the rabbit fence, we came over the top of a dune to see a veritable 'meadow' spread out before us - grass, flowers, trees ...