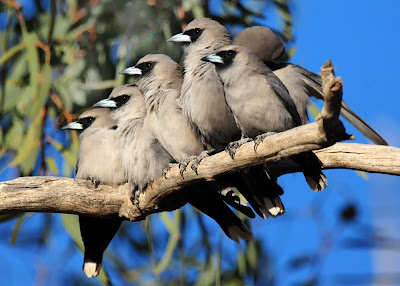 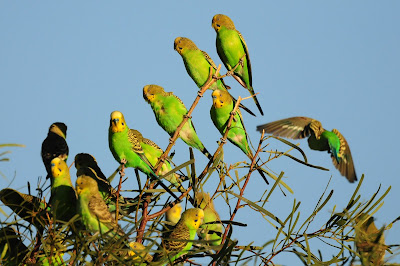 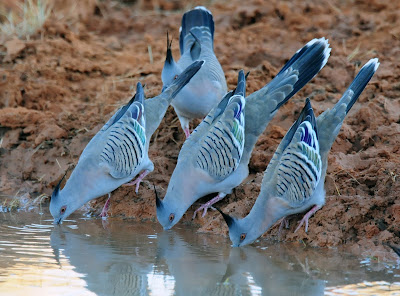 We met up with the others at Mt Dare, to start the Simpson Crossing. A steak dinner, a catch up with the various travel experiences of the others and cultivating the friendship of Chester, the hotel dog, occupied the evening. We gained agreement to a late-ish start so that we could do some birding at the dam and bore overflow at first light. Our efforts were well rewarded.

Huge flocks of budgerigars, galahs, zebra finches, corellas and red-tailed black cockatoos perched on every available tree waiting a turn at the water. White-breasted and black-faced woodswallows circled and returned to favourite branches. Honeyeaters fed on the garden shrubs. My laptop died before I had copied more than 4 of 14 folders to an external hard drive, I was able to recover the files from the card in the 30D with the wide angle, but not from the 50D which I was using for bird photography. So most of my birds from the trip are gone. I've posted some from Alwyn here to give an idea of the feast and famine situation with birds in the desert. Find water and you'll find birds.

Heading to Dalhousie Springs, we stopped at Blood's Creek and then at 3 O'Clock Creek. At Blood's Creek we saw yet another flock of Zebra Finches - these are tough little birds, able to eke out a living in the most arid landscapes. Blood's Creek was an important waypoint for both the Overland Telegraph and the Ghan Railway. In 1901 the Government put down a 2002 ft bore and a giant windmill which still spins slowly today, though there is little water available on the surface. Legend has it that when a traveller died here, they only had enough whiskey crates to make a short coffin with an open end and had to bury the man with his legs sticking out of the end of the box.

We stopped at 3 O'Clock Creek for a closer look at the Red Mulga or Minniritchi (Acacia cyperophylla). Also in the area were Coolibah, mentioned in Waltzing Matilda, Witchety Bush, amongst whose roots the tasty grubs can be found and Dead Finish, a wattle with such survival skills that it is said that when it dies everything is over.

Fairywrens and grasswrens flittered amongst the spindly shrubs.