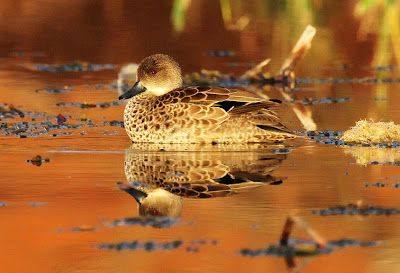 Grey Teal at sunrise (by Alwyn) 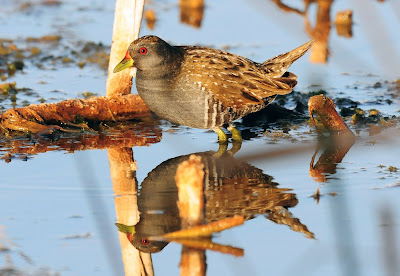 By the time we reached Purni Bore, it was hot, there were thousands of bush flies in my ears, up my nose and filling the space between my eyes and my sun glasses. (I have a number of photos that feature extreme close-ups of the flies). Alwyn went birding and was rewarded with great photos of an Australian (Spotted) Crake and a Spotless Crake. I sat in the shade of the tank-stand where a juvenile western gerygone came obligingly close, pecking on the ground under an acacia, and trillers stayed out of camera range in the shrubs.

The bodies of two camels lay together just off the road. Unfortunately the only camels we saw on the trip were dead or captive.

Overnight I heard a noise outside and looked out of the tent to see a dingo 2 metres away. He had found something to eat in the ashes of a previous camper's fire, and stood there for some minutes finishing his snack.

The morning dawned cool and clear. Just on first light my dingo howled nearby, and was answered by another in the dunes - their conversation continued for some moments. Wonderful! A light mist hovered over the billabong and the early morning light reflected off the reed beds turned its surface to liquid gold. A large group of native hens went about their business, galahs and corellas filled the trees and ducks floated motionless in imitation of pool ornaments.

Purni Bore is the result of drilling by the French Petroleum Company in 1963. It was capped and sealed when they abandoned oil exploration, but over time the wellhead corroded and water flowed out of the bore at a rate of up to 18 litres per second, creating an artificial wetland. The bore was capped in 1987 when the excessive flow was found to be affecting the flow of the nearby Dalhousie Springs. Travellers used to be able to swim at Purni Bore, but since the water flow was reduced reeds have grown along the bore drain. Now a sufficient flow is maintained to sustain the wildlife that has come to rely on this permanent water source. We saw footprints of dingoes, kangaroos, wallabies and camels, and many lizards and small mamals.

Water flows out of the borehead at 85C. Almost hot enough to make tea!