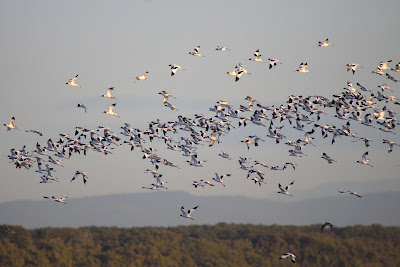 Red-necked avocet
Recognizing that shorebirds (Charadriiformes) and their wetland habitats are under threat worldwide, three Australian scientists conducted a large-scale aerial shorebird survey, sampling about a third of the Australian continent over a period of 24 years (1983–2006) and found that migratory shorebirds have declined by 73%, and Australian resident shorebirds by 81% in that period.

Of the 10 wetlands supporting the highest number of shorebirds within the survey bands, eight were inland wetlands and only two coastal, emphasising the importance of inland wetlands for shorebirds. Wetland area decreased significantly at four of the 10 main sites. Annual rainfall showed no trends but water extraction for irrigation was substantial for four of the 10 wetlands.

The study found that loss of wetlands due to river regulation is a significant contributor to the drastic decline in shorebird numbers in Australia.

Email ThisBlogThis!Share to TwitterShare to FacebookShare to Pinterest
Labels: Recurvirostridae