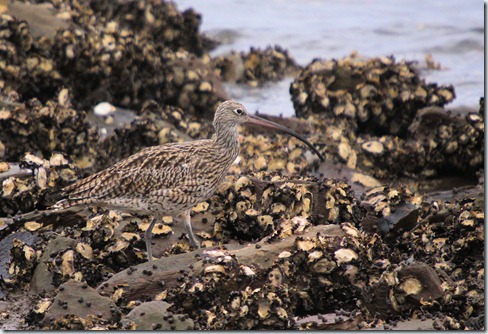 Both the dogs and I had a little luck today. First we were walking down the track when a hare came hopping down the middle of the track straight towards us. Duz and Thommo couldn’t believe their eyes, especially when as they started to run towards it, it froze. It soon came to its senses and started to run, quickly outstripping them, but they had never been so close to a hare. Usually they don’t see them until they run, so they are a long way behind and no match for the hare’s speed.

Then I saw this Far Eastern Curlew browsing amongst the oysters. They generally take off with their heart-stopping cry before I even see them. But this guy was happy to continue ambling about while I put the dogs in a down stay and edged closer. I took a couple of dozen shots (though it was early and heavily overcast) then collected  the dogs and walked on, leaving him still wandering around the mudflat.