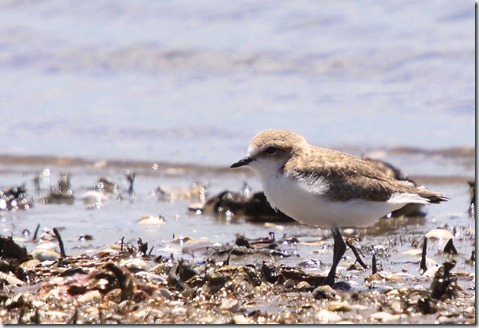 Having done a good deal of work since walking the dogs at dawn, I rewarded myself with a trip out to the Stockton Sand Spit, arriving around ninety minutes after high tide. There were good numbers of birds in the lagoon and salt marsh, and on the beach. There were two men collecting weed from the closest part of the lagoon, so  the birds were further out.  I crept out through the mangroves on the north side of the causeway, and got good views of the two pied oystercatcher runners, both quite grown up, one a little more independent of the parents than the other.

Three kinds of egret and a spoonbill were fishing in the shallows of the river. A large group of stilt hung around just off shore and a big group of godwit edged the beach. Curlews waited in the salt marsh.

I found a spot where I could sit on a log behind a grass tuft without putting up even the masked lapwing.  I didn’t have to wait long until a group of red-capped plover ambled up beside me to forage. The curlew were coming closer. And the godwit were near enough for me to identify at least one black-tailed among the bar-tailed. Terns and gulls were diving for fish.

Then they all took off. One of the weed gatherers was marching straight through the middle of the roost.

I waited half an hour but only the white-faced herons returned. However a peregrine falcon flew over, momentarily low enough for an ID shot.