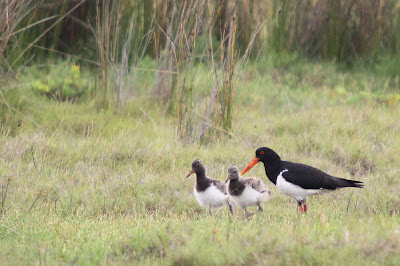 In recent years Pied Oystercatchers have been reported mating and nesting at this spot, but this is the first time I have seen young here. The two babies were first reported two weeks ago, and seem to be making steady progress towards maturity. They are in a patch of saltmarsh, which offers protection for the young birds. Recent visitors to the site have seen only one of the runners, and it was feared that one was predated, so I was thrilled to see the two of them today. The other parent was just out of the frame to the left (this is a heavily cropped shot taken with a 500mm lens, and I left before the birds became aware of me.)

The Pied Oystercatcher is officially listed as 'threatened' in New South Wales. While they are found all along the coast, they are thinly scattered.

They are primarily found on the intertidal flats of inlets and bays, where they forage at low tide, for molluscs, worms, crabs and small fish. The chisel-like bill is used to pry open or break into shells of oysters and other shellfish.

The Pied Oystercatcher nests mostly on coastal or estuarine beaches although occasionally they use saltmarsh or grassy areas. Nests are shallow scrapes in sand above the high tide mark, often amongst seaweed, shells and small stones, where they lay two to three eggs. The young leave the nest to forage beside the parents after three or four days.

The major threats to the Pied Oystercatcher are disturbances to their preferred areas by recreational vehicles, habitat destruction through development, and predation of eggs and chicks.
Posted by Marj K at 12:11 PM

Email ThisBlogThis!Share to TwitterShare to FacebookShare to Pinterest
Labels: Haematopodidae