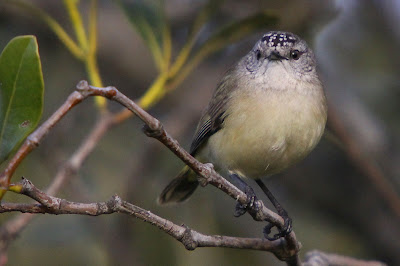 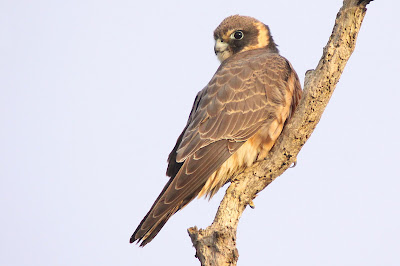 We were up particularly early this morning - probably as a result of falling asleep in front of the television. So I walked the dogs in the dark, and grabbed the camera from the car just as the sun rose.

A large group of thornbills were chirping in the mangroves and I was attempting to capture them in the very poor light when a hobby flew onto a sunlit perch beside me. He could have positioned himself a little better, but he perched there for some time much to the consternation of the thornbills, which immediately became still and quiet.

The hobby is one of Australia's smallest raptors. They will hunt small birds, up to nearly their own size. The yellow-rumped thornbill is one of the more common thornbills, identifiable by its spotted head as well as its yellow rump.

I stopped in at Stockton Sandspit, and came across the Hunter Bird Observers Club, gathering for their Tuesday walk. I chatted for a moment, but we had been out for two hours and a hot breakast was marginally more appealing than more walking.