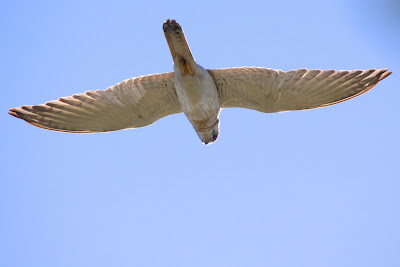 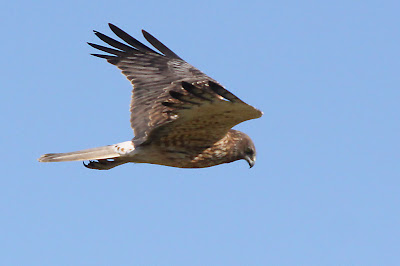 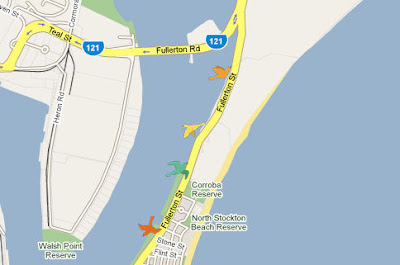 We generally park just after the bridge and walk along the mangroves before crossing to the beach.

It was afternoon and the mangroves were backlit, but as the tide was coming in it meant walking out through the squishy mud to get on the sunny side of the thornbills, brown honeyeaters and gerygones I abandoned any thought of photos of the mangrove inhabitants.

Luckily there were some raptors out - though the sea eagles stayed well in the distance over the river. There are twenty four diurnal raptor species native to Australia. The Swamp Harrier (Circus approximans) belongs to the Family Accipitridae, and the Australian Kestrel (Falco cenchroides) to the Family Falconidae.

Australian Kestrels are sometimes called Nankeen Kestrels after the red-brown cloth 'nankeen'. When hunting they plunge head first toward the ground, pulling out of their dive at the last moment to strike with their feet. Kestrels have specially adapted eyes which enable them to see ultra violet light, giving them the ability to see scent and urine trails which are invisible to humans, and gives them the advantage when hunting to know where to expect to find their prey. Adult male kestrels are identifiable by their grey heads and tails, while adult females have a brown head and rufous tail. The female birds are generally larger than the males.

The Swamp Harrier is largely dark brown, becoming lighter with age, and has a distinct white rump. Females are larger with rufous underparts, while the smaller male is lighter underneath. It hunts by flying slowly, low to the ground, on upswept wings. When hunting they 'quarter', which means that they systematically search for prey covering the ground thoroughly. The swamp harrier is widespread throughout Australia, and is usually found in wetlands and well-watered open country.