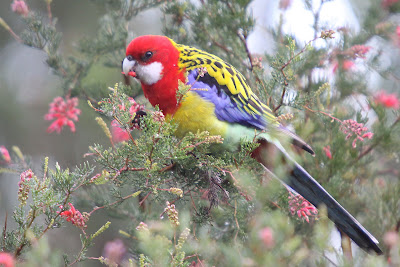 With autumn flowering plants in full bloom, weeks of rain and mild temperatures have convinced many other plants that it's spring, so the Gardens were an inviting place for a walk on a day when the sun at least tried to appear.

A relatively small area of the gardens is planted and managed, organised into sections by habitat and species. The rest of the area has paths through the natural wetlands and bush.

The grevillea area was very busy with rosellas and spinebills. The flowering eucalypts above were filled with the screeches of lorikeets and noisy friarbirds. A whipbird scurried from shrub to shrub and could be heard scratching in the mulch from their protective depths.