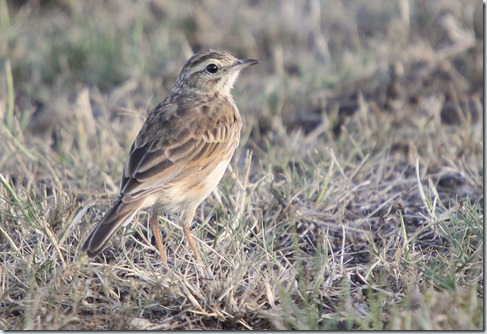 Motacillidae, or pipits and wagtails, are a large widespread family, however Australia has only the one endemic species of pipit, the Australian Pipit (Anthus australis), and wagtails are known only as intermittent migrants. This bird used to be classified as Richard’s Pipit (Anthus richardi) but was recently declared a separate species. This was much to my relief as I resented the fact that Richard had his own pipit.
We see the pipits regularly as they like the same mown grass areas as I like walking with the dogs. The birds and dogs generally ignore each other, though the birds rarely let me come close if I’m carrying a camera. I should get Thommo a camera to record close-ups for me.
They are primarily terrestrial and pursue insects by running or low flying and snatching them from the air. They inhabit grasslands and similar low vegetation as diverse as alpine meadows, low heaths and parkland from coastal situations to the arid interior.
“Unlike larks, they have a conventional passerine pessulus in the syrinx, effectively 9-primaried wings, and acutiplantar tarsi inn which with the back-sides are covered by an unbroken sheath and the acrotarsium by fused scutes. They also have a fully double humeral fossa, thin ectethmoids, clavately tipped maxillo-palatine processes, fully perforate naris and a more conventional temporal region in the cranium.” So now you know. (R. Schodde, CSIRO Australian National Wildlife Collection, Canberra, ACT, Australia)
Posted by Marj K at 6:44 PM

Email ThisBlogThis!Share to TwitterShare to FacebookShare to Pinterest
Labels: Motacillidae