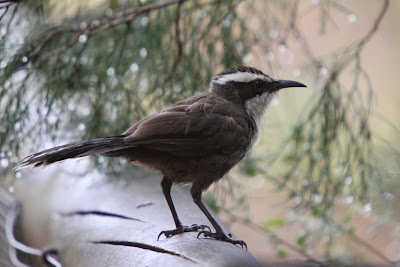 Our very hot day in Dubbo was followed by an evening storm, followed by steady rain. I headed out along the Newell Highway south hoping that the weather would clear. There is open TSR all along this highway which features many reputedly great birding spots.
I turned in at Rifle Range Road, and walked the track that ran parallel with the highway. Black Cypress and Casuarina were spangled with rain drops. Along the path was evidence of birds, probably Glossy Black Cockatoos, having fed on the seed pods. An Eastern Yellow Robin followed me along the path. Honeyeaters browsed high in the trees, but it was too dark to identify them. Brown-headed Honeyeaters have been seen here recently.
The rain started coming down in earnest so I retreated to the car. After two separate vehicles had stopped and asked if I was OK I decided to drive on, to save other kindly country folk from getting drenched winding down their windows to offer un-needed assistance.
I pulled off again at Tink's Lane, however water gushed in rivulets down the dirt road and the rain showed no sign of easing. I drove on to the gravel pit where Speckled Warblers are regulars, but if they were there I couldn't see them for a curtain of water. I decided to check out the Mountain Creek Travelling Stock Route for future reference, and indeed it did look promising, but I didn't get out of the car.
Headed back into town, I reached Western Plains Zoo just on 9:00 as it opened, and the rain began to ease. The Zoo is an open range zoo, with animals contained in large areas by wet and dry moats with no cages in sight. The zoo has an active breeding program for endangered international species, and a breed and release program for a number of threatened Australian species.
A 6k road loops through the zoo, and a network of paths criss-crosses the natural bushland of the site. The permanent water, freely available food and secure nesting sites makes the zoo a haven to many wild birds.
A group of White-browed Babblers were chattering in the African area, searching the leaf litter for grubs and pecking at cracks in the tree bark and fence rails.
Posted by Marj K at 8:35 AM

Email ThisBlogThis!Share to TwitterShare to FacebookShare to Pinterest
Labels: Pomatostomidae