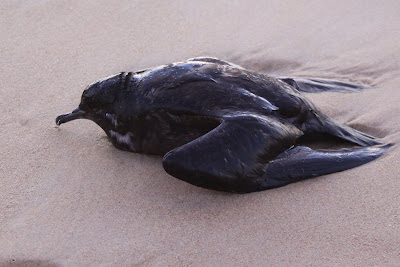 Walking on Nobby's I sadly came across around a dozen dead and dying Short-tailed Shearwaters. It was difficult to know what to do, but even more difficult to do nothing. Those that were being tossed by the tide I moved out of the water, but I knew I was only delaying the inevitable. Birdline NSW reports dozens dead on Whale Beach. It is believed that starvation and exhaustion on the birds' southerly migrations are the main causes of these deaths. Adults migrate south to their breeding islands during October, and have little to eat on the way. If they meet strong winds, the weaker birds are unable to reach their breeding grounds and end up as casualties along our coast.
The rest of the morning was a little happier; wagtails sang in my garden, grass parrots ate dandelions on the nature strip, lorikeets fed in the pohutukawa, koel courted on the powerlines and channel-billed cuckoos noisily circled the off-leash area.
Posted by Marj K at 6:33 PM

Email ThisBlogThis!Share to TwitterShare to FacebookShare to Pinterest
Labels: Procellariidae